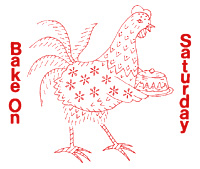 This 1960's dish towel design from Tri-Chem was originally designed to be painted with liquid embroidery.  Back in the day this was a brand new product introduced as a time-saving solution for the busy working woman.

My Mom, being a busy working woman, had eagerly purchased the ball-point tubes of paint for us to try (I was about 12 then), but we discovered the medium was messy and difficult to control.  As a result, we ended up with some very interesting dust cloths!

However, I'm told the current liquid embroidery paint tubes work much better.  So if you prefer coloring to stitching then here's something for you too.

But as I prefer to stitch these, and others may as well, I took liberties and made a few slight modifications to the graphics choosing a friendlier font (for needlework) and a different layout. If you love Lazy-Daisy, I've also added optional daisy borders, to carry out the theme.  They can be stamped lengthwise alongside the chicken (like the original lettering) or used as a border underneath her. 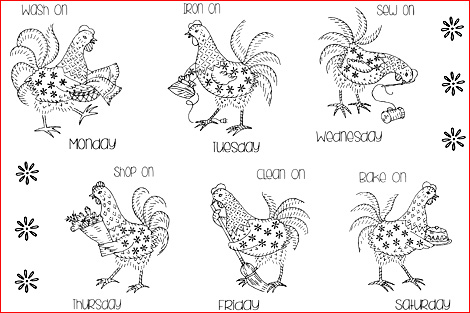 But wait!  There's more!  I also created BAKE! as a theme towel.  It's not shown on the envelope cover (above), but it will be included in the pattern as a sort of Surprise Bonus.  Only my blog readers will know the what, where, when, how and why. 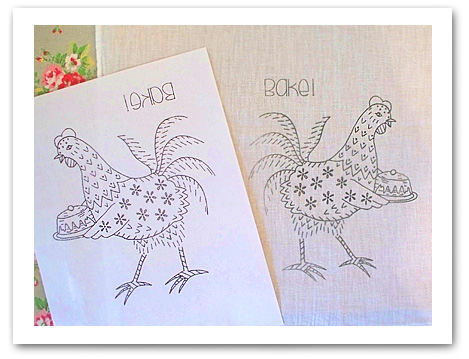 Here's the BAKE! towel, stamped and ready to go. 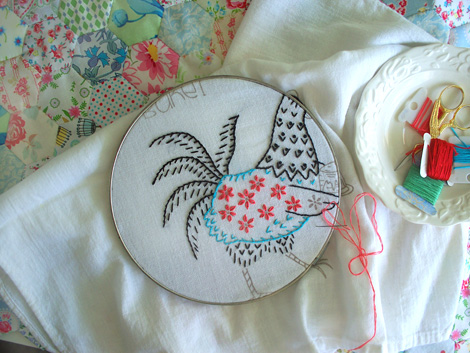 Already a work in progress!  This was stamped onto a fresh flour sack dish towel, but I think it would be darling on an apron bib or baking smock.  It measures about 8" x 7" (without the weekday).

These old patterns usually had numbers and rarely had names (with the exception of Aunt Martha's).  But this one had neither that I could find, so I've given it both and added it to the PatternBee website as Spring Chicken #4472.  In the event the link no longer works, look under the Kitchen Towel category, under 'Feathered Friends'.