As I sit at my desk picking through my collections of old pattern motifs, I'm honestly amazed at how many embroidery transfers were created between 1930 to 1960; literally hundreds!  And every single company that produced them is gone now with few exceptions.  I often wonder why no credits were given to transfer pattern artists.  There is so little history to glean from.  I've come to suspect that Laura Wheeler, Alice Brooks and other names were fictitious.  There seems to be no trace of them anywhere, except individuals like Ruby McKim whose family has carried on her artistic legacy.

Moreover, I have always had a hunch that most transfer patterns were created by men cartoonists.  I could be wrong, but this is not out of the realm of possibilities as patterns were mostly distributed by newspapers and newspapers hired cartoonists for a variety of jobs.  And maybe those cartoonists, being mostly men, didn't want their names associated with women's crafts.  And maybe women's names sold more patterns.  I don't know.  Just my thoughts.  It would explain some of the subject material anyway. 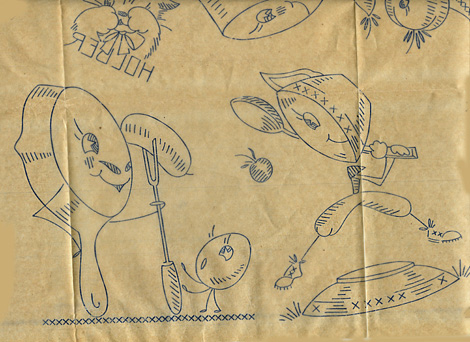 Like this very old brilliant Vogart transfer pattern from the 1940's.  Just saying.

This is only a preview. Your comment has not yet been posted.

The letters and numbers you entered did not match the image. Please try again.

As a final step before posting your comment, enter the letters and numbers you see in the image below. This prevents automated programs from posting comments.

Having trouble reading this image? View an alternate.

(Name is required. Email address will not be displayed with the comment.)